I have a nice but small workspace in my living room. It comes with a docking station for my surface, so my husband can also use the monitor, keyboard, mouse and headsets for home office use or support issues. So we connect our Microsoft Surfaces to that and everything is good. Also I run my CTC-3D-printer software on it, the Arduino IDE and other software I do not use for work but for private issues. Sometimes it happens, that I want to work on some nice projects but my husband is using the docking station and as I get older and older I really need a big monitor, a good mouse and a nice keyboard instead of the stuff the Surface comes with 🙂

So today I decided to get that old HP ProDesk 490 G2 MT from the cellar and throw it under my small little table, grab an old Fujitsu TFT-Display connect this ugly Microsoft Mouse and that horrible Microsoft ergonomic keyboard to put all together and install some nice Windows 10 to use this machine for my private hobbyish things to do.

The Hewlett Packard ProDesk 490 comes with 32 GB of RAM and a i7-4790 8-core-CPU running at 3.60 GHz, so that might be enough for my private things. Horrible what kind of hardware is sitting somewhere in the cellar in my house for years, waiting to be found and used again.. 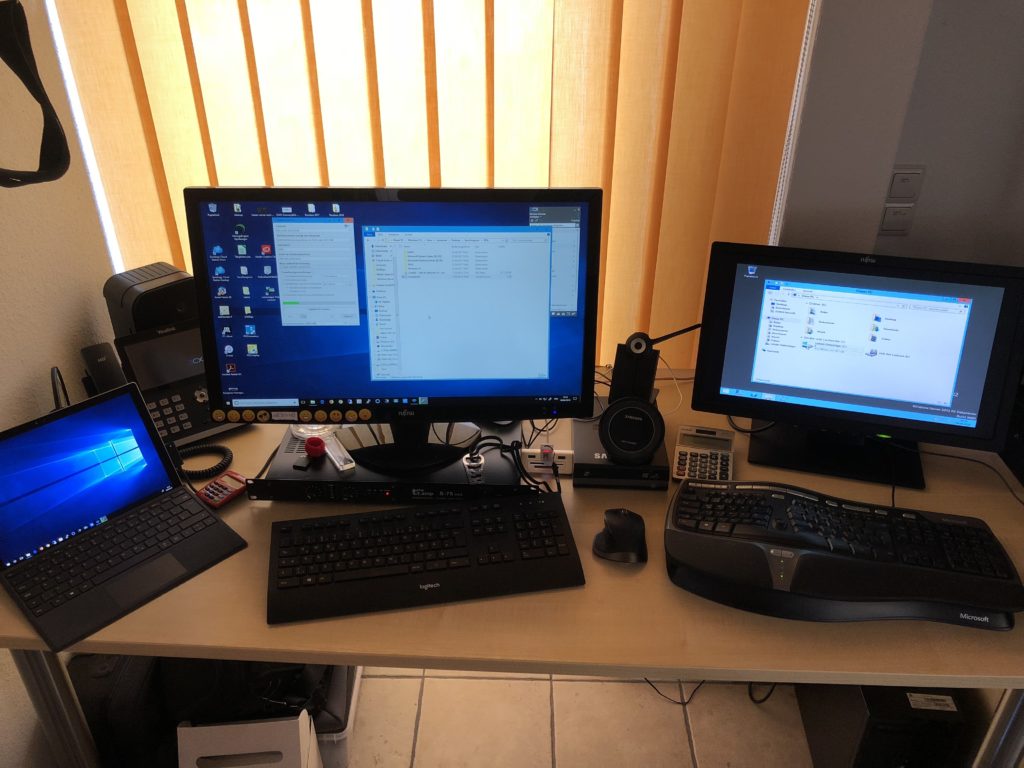 My desk at home. Surface, Docking-Station and the new “old” i7-System for my private Stuff.

So I’ve set it up and it hast Windows Server 2012 R2 on it and also Hyper V with two Containers. It was kind of a test-machine earlier I think and just got forgotten as my company moved from Dettingen to Reutlingen. Not bad for me now 🙂 I will install Windows 10 on it, but also Hyper V to run some containers with Linux or other OS for experimenting a bit. It has an internal 1 TB WD-SATA-Drive. I will upgrade this later to an SSD I think. But for now I am good with the system.

Bringing my Windows 10 ISO to a bootable USB-stick

I have my Windows 10 System DVD as ISO-image on my storage and I need to install that onto the HP ProDesk. I don’t want to burn a DVD and I don’t have any DVD-RW at my house, so I downloaded Rufus, a nice ISO->USB-Tool for Windows, where you can make bootable USB-Sticks with ease. So this is the perfect way to put any ISO to a bootable USB-stick. It takes a while but this little software is doing its job. Download, run, “burn” to USB. That’s it.

Setting up the HP ProDesk to boot from USB

To boot that machine from USB its necessary to get into the BIOS and change the booting device from internal drive to USB. After reboot you hit the ESC -Key followed with F10  for entering the BIOS settings. My machine was already configured like that and booted directly from my created Windows 10 bootable USB-Stick. So that worked well. The installation took about 17 minutes until the machine was completely installed and set up with the Admin-User and all the other things, Windows 10 does at the first start-up. 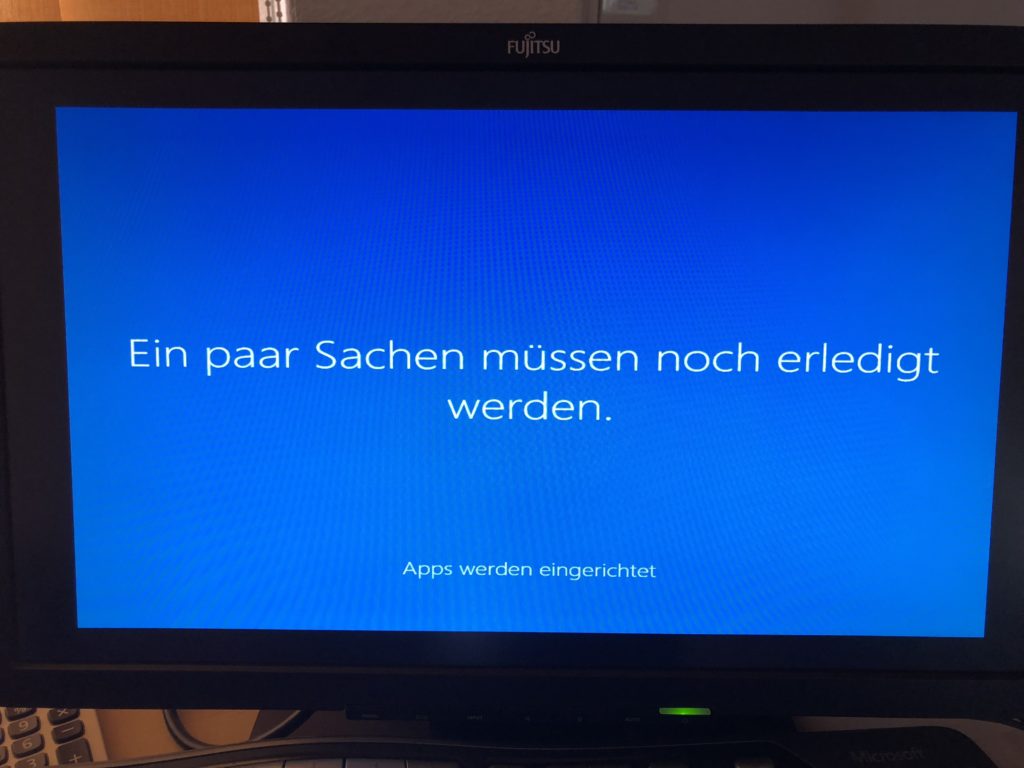 Windows 10 is getting set up for the first time

Right after the first startup Windows 10 recognized the display and configured it so it uses the full screen. It’s really cool, that Windows 10 is working so nice and does everything needed in the background.

Updating Windows 10 to its newest version and driver updates

As the machine is hooked up to my local network and there is a DHCP-Server running giving the HP ProDesk it’s ip-address I now will first install all Windows 10 Updates available. That may take some hours I think. Started at 13:00 the download of all updates and the first update-installation took until 13:37 (nerd time) so round 40 Minutes included a reboot 🙂 Some more updates came up and so everything was done at 16:40. This 1709-Update took horrible long to download, prepare and install. And after that: six more Updates waiting for being installed. Oh come on, Jesus Christ! How can that be. The whole installation of a new Windows 10 system took four f*cking hours and several reboots. 15 Minutes for the base installation and the rest for updating? Gnaaarf!

Hewlett Packard has a nice software and download site for downloading the drivers of the computer. Also there is the HP Support Assistant which can be downloaded from their page. This nice little tool checks the driver and if there are newer versions available they automatically download and install. Also this HP Support Assistant shows you if your computer has any warranty left, its serial-number, product number and all this interesting stuff about the hardware, memory used and so on. You can hassle with the manual installation of the drivers, but I prefer the automated thing with the HP Support Assistant. 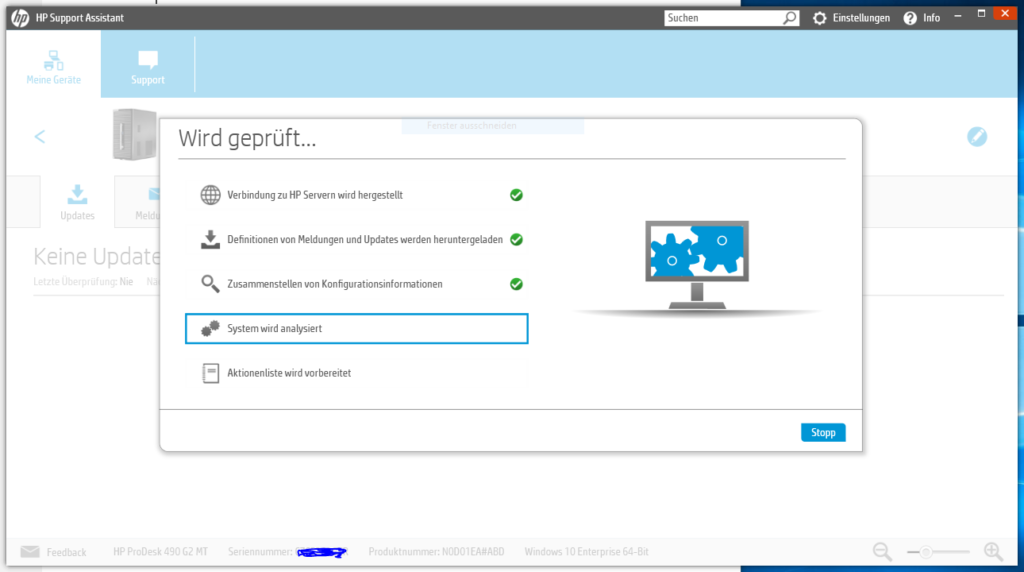 As I want to programm some nice Arduino based things, I need the Arduino IDE and downloaded the EXE-Version instead of the dull Microsoft App-Store-Version. I want to have the software in my hands and be able to store it on my drive somewhere. This App-Store thing sucks horrible 🙂 And so I downloaded the 1.8.5 Version for XP and above. Installation took about 3 minutes. That was fast.

I own an CTC 3D-Printer and I want to print my things from my new HP-PC directly to the printer over USB. So I need the Makerbot Desktop-Software which is compatible to the CTC-printer. So I’ve downloaded that 64bit-tool and installation also was done within 5 minutes. Makerbot Desktop is an old version – the new one is called Makerbot Print. But for the Replicator 2X Clone I own the Makerbot Desktop is the software to go with. My CTC-3D-Printer is terrible dusty, so I have to clean it first and connect it to the computer to  play around with it again. The first thing I will print is the cartridge-case for the GX4000 Everdrive for sure. was a bit tricky to put the PCB in the cartridge slot without having a case. 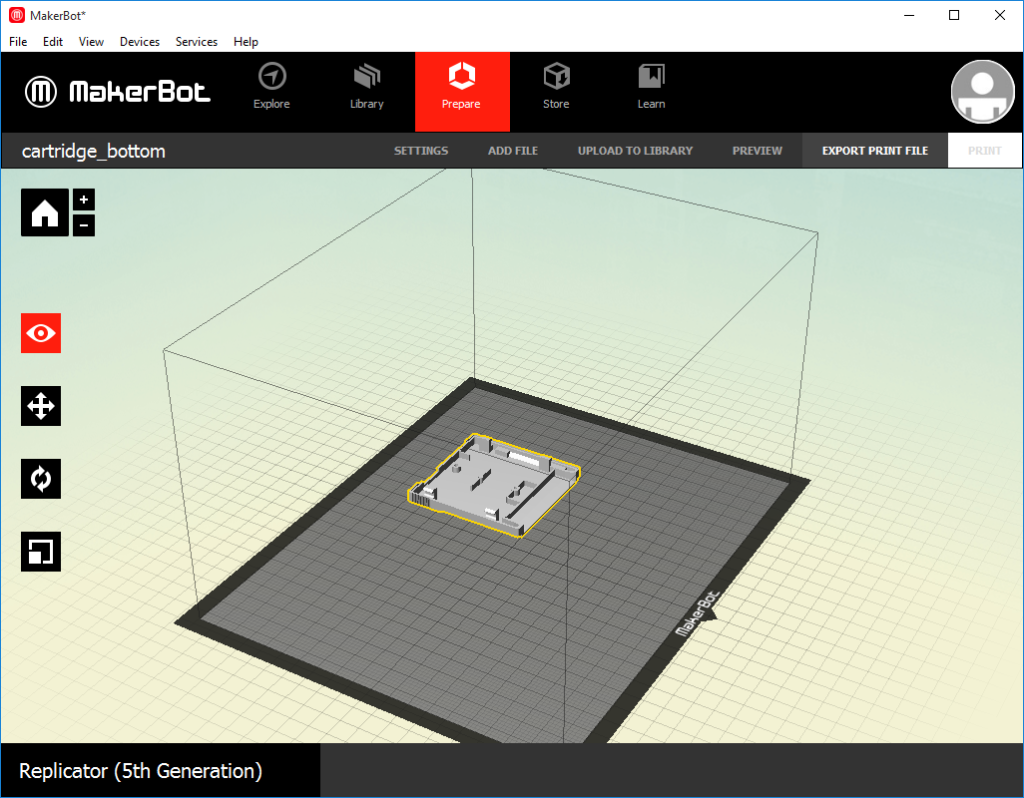 So the initial set-up of my brand-new “old” HP computer is done and now I have to wait for the Arduino stuff i’ve ordered a few days ago, so I can start with my web-radio-project. I have set up a list of the programms and tools i installed on my PC.